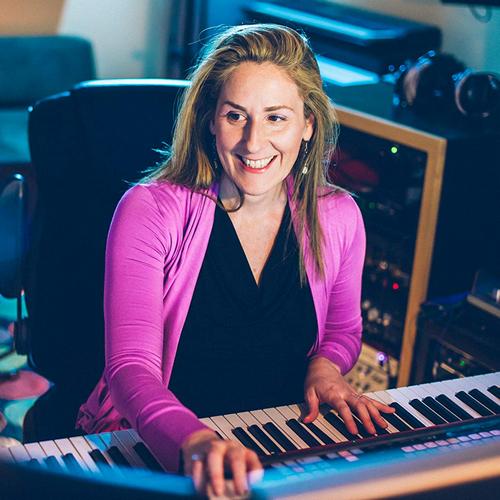 Ronit Kirchman is a composer, music producer, songwriter, singer, and multi-instrumentalist. She composes music for film and television, theater and dance, multimedia installations, and the concert stage. She is also an accomplished visual artist and author.
Recognized in the press as “an extremely original voice” with “a virtuoso touch”, and “a truly unique force in the entertainment industry”, Ronit is the composer for the riveting Emmy and Golden Globe-nominated dramatic series The Sinner (USA Network). Its highly anticipated third season, starring Matt Bomer and Bill Pullman, will air in 2020. Ronit has also recently completed the score for the new thriller series Limetown, based on the hit podcast and coming to Facebook Watch on October 16. Ronit’s widely varied film scores include the feature films Zen and the Art of Dying, Finding Neighbors, and The Skin I’m In, as well as The Golden Age of Fish, Say You Love Me, and Gowanus, Brooklyn among many others.
Kirchman is known for her impressive stylistic breadth, depth, and originality, as well as a remarkable cross-disciplinary understanding of storytelling and creative collaboration. Ronit is the first-ever recipient of the Sundance Institute Time Warner Foundation Fellowship in Film Music, and has also been awarded the Sundance Composers Lab and Documentary Composers Lab Fellowships, BMI Conductors Fellowship, and a Subito grant from the American Composers Forum.

8 months ago in Artists
composerRonit Kirchman
Releases
We use cookies to ensure that we give you the best experience on our website. If you continue to use this site we will assume that you are happy with it.OK