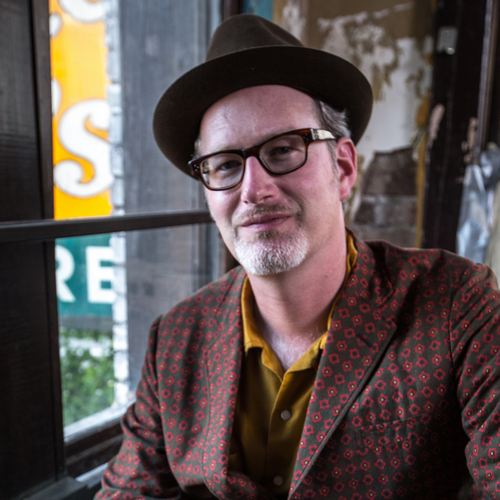 Scott Bomar is a Memphis-based musician, Emmy Award-winning film composer, Grammy-nominated music producer and recording engineer.
In 2005, Bomar composed the score for Craig Brewer’s award-winning film, HUSTLE & FLOW for which Bomar has received much critical acclaim for his Memphis soul meets hip hop score.
Bomar returned in 2006 to collaborate with the filmmakers of HUSTLE & FLOW as Executive Music Producer and composer of the film, BLACK SNAKE MOAN. He worked with film’s stars Samuel L. Jackson and Christina Ricci in the studio to record songs for the film, which are performed on screen. The process began by Bomar taking director Craig Brewer and Samuel L. Jackson on a road trip through Mississippi, meeting and working with blues musicians, parlaying blues classics like the raucously vulgar “Stackolee” and “Black Snake Moan,” into sinister, 21st century laments. Bomar also composed the score utilizing musicians with Memphis music roots, such as harmonica legend, Charlie Musselwhite , Jim Dickinson and his sons Luther and Cody Dickinson – the contemporary blues/rock group, The North Mississippi Allstars. Bomar most recently collaborated as a producer with Brewer on the MTV New Media series,”$5 COVER.”
Bomar has also gained prominence as a bassist, backing legendary Stax artists such as Rufus and Carla Thomas, Eddie Floyd, William Bell, Sun Records pioneer Rosco Gordon, and Motown session guitarist, Dennis Coffey, both in studio session and on the road. Bomar is also the leader of The Bo-Keys, a Memphis soul/funk group featuring former Stax/Volt, Hi Records and Isaac Hayes session players Skip Pitts, Howard Grimes and Ben Cauley. The Bo-Keys performed on the film and soundtrack for HUSTLE & FLOW and on the Paramount/Nickelodeon animated feature BARNYARD, directed by Bob Oedekirk. In 2008 The Bo-Keys appeared in the film SOUL MEN, performing on-screen with stars Samuel L. Jackson and Bernie Mack and on three songs Bomar produced for the film’s soundtrack, one of which, “Soul Music” by Anthony Hamilton was nominated for a Grammy Award in 2009. The Bo-Keys have performed live at many festivals including many appearances at The Ponderosa Stomp, London’s Barbican Performing Arts Centre and Lincoln Center’s Midsummer Nights Swing Series.

1 year ago in Artists
composerScott Bomar
Releases
We use cookies to ensure that we give you the best experience on our website. If you continue to use this site we will assume that you are happy with it.OK