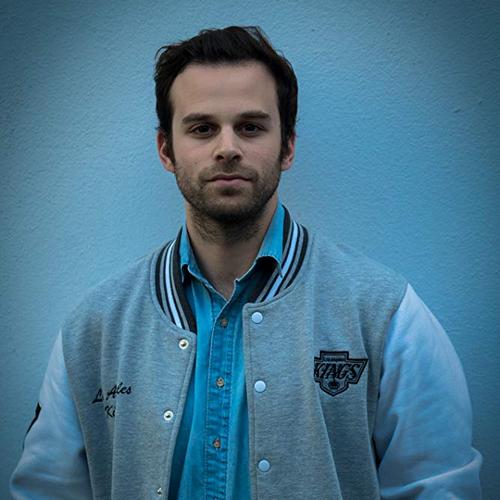 
Zach Robinson is an LA based composer, music producer, and electronic musician. Along with long time friend and colleague Leo Birenberg, Zach most recently co-composed the score for YouTube Premium’s mega-hit series Cobra Kai, which takes place in the Karate Kid universe thirty-four years after the original film and stars Ralph Macchio and William Zabka reprising their original roles. Cobra Kai boasts a 100% Rotten Tomatoes score and has generated over 40 million viewers. It was renewed for a second season six days after its premiere date.Zach most recently finished composing the music for the Impractical Jokers movie as well as Cobra Kai Season 2.
Previously, Zach co-composed and oversaw all music production for YouTube Red’s first developed sitcom, Sing It!, created by YouTube superstars, Benny and Rafi fine. He again collaborated with the Fine Bros for 2017’s feature film, F The Prom. Zach’s other scores include the horror-comedy Bad Exorcist, racing documentary The 200 MPH Club, and the western short Born Again Sinner. He also wrote the theme song for USA Network’s NFL Football Fanatic.
After receiving his degree in music composition from Northwestern University, Zach cut his teeth working with acclaimed film composer, Christophe Beck, writing additional music for films such as Ant-Man, Edge of Tomorrow, Frozen, Hot Pursuit, Sisters, and The Peanuts Movie.
In parallel to his composing career, Zach creates 1980’s inspired electronic music under the pseudonym D/A/D. His most recent album, The Construct, was named one of the best cassette releases of 2013 by NPR and received critical acclaim from numerous online publications. His video for “Orion Beach” premiered on NPR’s “All Songs Considered” and is a Vimeo staff pick.
Zach’s passion lies in the fantastic. He is a mega-fan of classic B-film horror, space epics, lounge exotica, smokey noir, buddy cop movies, and 1950’s/1980’s visions of the future. He currently resides in Los Angeles, CA.

1 year ago in Artists
composerZach Robinson
Releases
We use cookies to ensure that we give you the best experience on our website. If you continue to use this site we will assume that you are happy with it.OK