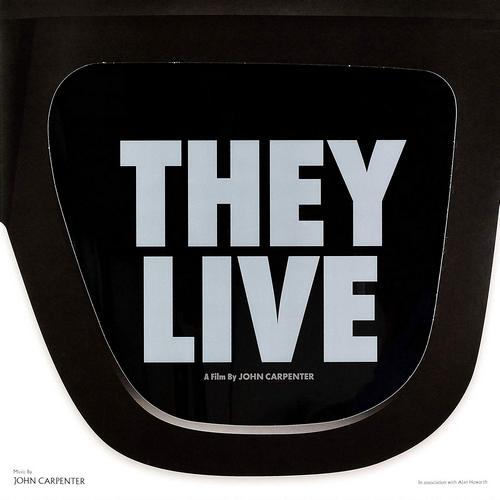 Original Motion Picture Soundtrack (Vinyl Release) from the movie They Live (1988). The score music by John Carpenter and Alan Howarth.

Grab your sunglasses, your bubblegum, and your shotgun as Death Waltz Recording Company is bringing back John Carpenter and Alan Howarth’s brilliant score to THEY LIVE. A classic story of one man fighting for the freedom of the world with a great science fiction twist, the movie is full of amazing dialogue and also contains the greatest fistfight in the history of cinema. Like most of Carpenter’s films, THEY LIVE has an urban western feel to it, which is emphasized by the infectious score.
Carpenter and Howarth’s main theme conjures up images of a lone cowboy entering town, with the main melody augmented with the sounds of harmonica and saxophone. There’s a carefree attitude which reflects Rowdy Roddy Piper’s character, but the score takes on a more sinister tone when he realizes he doesn’t know anything about what’s really going on. Carpenter’s signature synth tones create an uncomfortable atmosphere, but the main bass-line is always fighting against them, never giving up. Electric guitar is used fleetingly, but brilliantly, and the whole score embodies the kind of rebelling against authority Carpenter is famous for. THEY LIVE will rock your world without the need for a Brazilian plastic surgeon to put you back together again.

9 months ago in Soundtracks
Alan HowarthJohn CarpentermoviesoundtrackThey Live
Tracklist
Latest Releases
We use cookies to ensure that we give you the best experience on our website. If you continue to use this site we will assume that you are happy with it.OK